How to find the proper Boots in the League of Legends

There are a lot of various boots in League of Legends, but it is pointless to stack all of them. But you need one, to increase your movement speed and gain additional stats. But which one your champion needs? It fully depends on the champion and opponents. Usually, you will have four or five various options, so you need to know in what exact moment you need each of them.

The boots are not so great artifact at first glance, but if you’ll go deeper into the League in-game mechanics you will understand how important they are. They will give you a crucial movement speed that will help you to avoid ganks or to chase some low-hp enemy but movement speed is not all they could suggest to you. From additional armor and magic armor to the extra damage and attack speed. By the way, if you are playing as Cassiopeia this guide may be worthless for you:) After all, she does not have legs 😀 And her passive must be considered too, of course.

So, let’s start and choose the one pair of boots that will be perfect for each situation.

The ADC (AD Carry) meta is coming back to the League of Legends, and that is why the importance of the auto-attacks is coming back. And if you are playing as an ADC or someone who uses auto-attacks to deal damage (like Draven, Kog’Maw or Lucian and etc.). It is obvious that additional attack speed for such heroes is the greatest stat that you want to stack, it will give you a huge advantage in damage dealing in all stages of the game.

But do not chase for the Berserker’s Greaves in 100% situations when you are playing as ADC. Look at the enemy’s team composition. Do they have a lot of AP champions with great burst damage? Then you would like to have Mercury’s Treads in your arsenal to increase your defense against those champions.

While the main bonus does not look so great, only 25 additional MS, the second bonus is gorgeous for roamers of any kind. While you are out of combat you gain 115 additional movement speed! This will give you an ability to roam to the other lane in a blink of an eye.

Boots of Mobility will be the greatest choice for all roaming supports who could bring chaos and take advantage of the ganks. Not only ganking supports prefer these boots, but utility ones also love it.

Slowness is not for me – Boots of Swiftness

These boots are extremely unpopular and here I’ll describe to you why. The movement speed buff is may look great – 55 additional MS bonus, but the other stats are pure trash. They decrease the duration of movement slowing effect by 25%. And this is an almost completely useless thing. It affecting only slowing effects, like Olaf Q ability and etc. Here you could see all the abilities that apply movement slow. 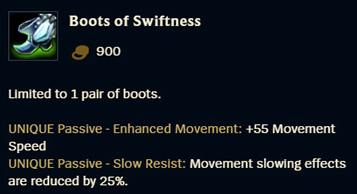 Boots of Swiftness are extremely useless due to the extremely weak passive effect, you will want to buy another, much stronger boots, like Mercury’s Treads or Ninja Tabi’s.

If you are playing on the champion who fully rely on his abilities for killing or surviving, then Ionian Boots of Lucidity is the only choice for you. These boots give you a great additional movement speed and they decrease the cooldown of all your spells (yup, and CD of summoner spells) by 10% and by 15% if you took Cosmic Insight. 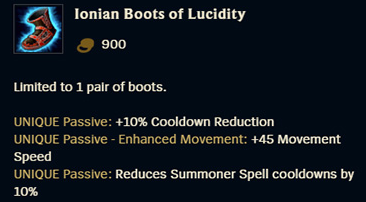 Long story short – these are the greatest boots ever made for AP spamming champions, like Lulu, Karma, Vladimir, and others.

The best choice on the market – Mercury’s Treads

Mercury’s treads (later merc treads) are the boots that are the most popular in the current meta of AP champions. They are the perfect choice for almost every champion and that is why many boosters (according to the elo-boosters.com) are taking these boots as a default choice. They are giving you 45 movement speed and 25 magic resist. And the MR (magic resist) is the core thing that makes these boots so attractive and go-to item almost in every match. 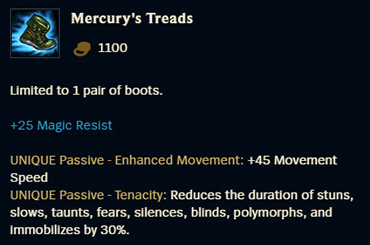 This is the highest priority item if you standing against an AP champion who harassing you continuously, or opponents have a lot of burst magic damage. In most cases, 2 and more AP champions (like AP mid laner and AP support/carry) will be enough to buy merc boots.

But the MR is not the only thing that highlighting these boots from the other. The additional passive effect – Tenacity, which reduces the time of CC effects by 30% is priceless. So if you feeling a struggle in surviving in team fight due to the lots of crowd control abilities, then the Mercury’s Treads will be your savior.

The best protection from the ADC – Ninja Tabi

As you know, Riot Games trying to bring back the AD Carry meta into the League of Legends. In the previous patch – 9.11 many of them were buffed so maybe it is a time to think about some counter item? And that is where Ninja Tabi’s will help you and save you more than once. Ninja Tabi’s providing +20 armor, + 45 movement speed and block 12% of the damage that caused by the enemy’s auto-attacks. This will be a great addition to your survivability both during the laning stage and the mid/late stages of the game. 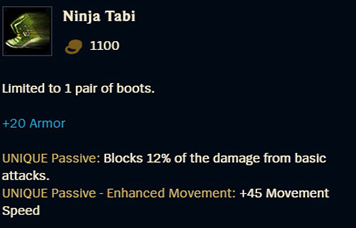 12% of damage reduction may be looking not so great, but they are working so fine, that you will buy them all the time, especially if you see 2 AD champions in the enemy team. Extremely valuable item during this, Marksmen LoL meta, so right now these boots are in the “must buy” category.

Who the lovers of Magic Penetration – Sorcerer’s Shoes

AP mid laners is the most common thing in the League of Legends. And all AP champions are praising these Sorcerer’s Shoes for the magic penetration they provide. +18 Magic Penetration is an extremely useful stat that will give you an ability to break through enemy’s magic resist and deal a ton of damage.